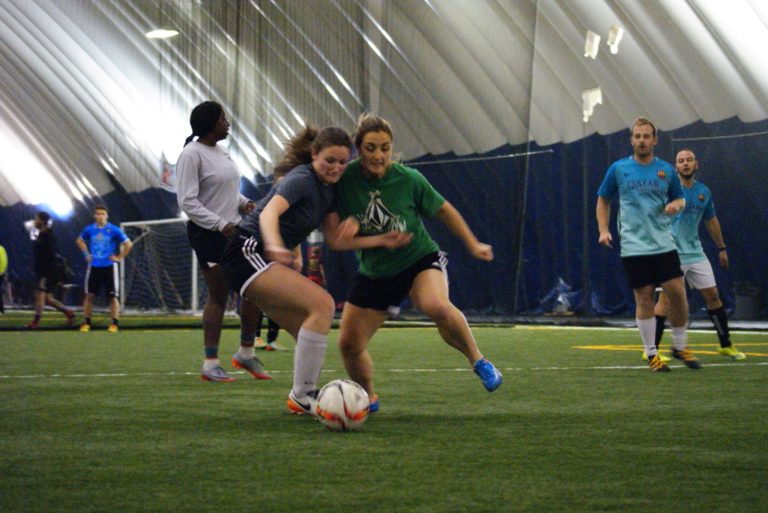 Teams will be required to show up dressed and ready to play at the beginning of their time slot. For 1.5 hour games, if a team is not ready 15 minutes after the start of the game, the game will be automatically forfeited. For 1 hour games, teams have 10 minutes before they forfeit. The remainder of the time slot will be awarded to the players present on the field, without a referee. Forfeited games will not be rescheduled.

Men’s and Women’s leagues: 7 players per team, including goalkeeper. Minimum 6 players are required to field a team.

Co-ed leagues: 7 players per team, including goalkeeper. Minimum of 2 women and 2 men on the field at all times. Minimum 6 players are required to field a team which must include 1 male and 1 female.

Goalkeepers are not allowed to pick up a kick-in. If a goalkeeper picks up a kick-in, an indirect free kick will be awarded to the opposing team at the spot of the foul. Persistent negligence of this rule for goalkeepers may result in a yellow card at the discretion of the referee.

There are no offsides in 7-on-7 co-ed soccer.

A goal can be scored from anywhere on the field of play, except for the following circumstances:

Start of a half or restart after a goal, kick-in, indirect free kick, or if goalkeeper is to throw the ball into the net. In the case of a free kick or out of bounds play, the ball may be scored if any player on either team touches the ball after it’s initially struck into play.

Co-ed leagues: Only indirect free kicks will be awarded. Only exception is for fouls within the goalie box a penalty shot may be issued. All opposing players are to be a minimum of 5 yards from the ball. Persistent infractions of this rule may result in a caution at the referee’s discretion. Ball must be stationary when it is kicked.

A goal-kick must be taken anywhere inside the goalkeeper’s box. Ball is to be stationary before entering the field of play. All opposing players are to be a minimum of 5 yards from the ball.

All players are to be a minimum of 5 yards from the ball when the penalty-kick is taken and cannot be inside the goalkeeper area.

Corner-kicks are direct and can result in a goal. All opposing players are to be a minimum of 5 yards from the ball. Persistent infractions of this rule may result in a caution at the referee’s discretion. Ball is to be placed at or near the corner at the discretion of the referee.

At the beginning of each half, and after each goal, a center-kick will be given. Ball must be stationary when it is kicked. All opposing players are to be a minimum of 5 yards from the ball and in their respective half. Persistent infractions of this rule may result in a caution at the referee’s discretion.

Goalkeepers are not allowed to use their hands when the ball is passed back to them by their own team with intent. Intent will be judged by the referee’s discretion. If the referee judges that there was intent, an indirect-kick will be awarded at the spot of the foul, or at 5 yards from the goal-line, whichever is further from the goal-line.

There are unlimited substitutions and can be made during the course of play. Substitutions are to be made on the same touchline as the team bench. Persistent infractions of this rule may result in a team caution at the referee’s discretion.

Slide-tackling is not permitted and it will result in a free-kick or penalty-kick (direct or indirect, depending on the league) and a player may be cautioned as a result of this infraction at the discretion of the referee.

Slide-tackling in the vicinity of an opposing player is deemed dangerous play and is also not permitted and it will result in a free-kick or penalty-kick and a player may be cautioned as a result of this infraction at the discretion of the referee.

Sliding while preventing a goal or to keep a ball in play is allowed as long as there is no opposing player in the vicinity. Sliding, even if not making contact with a ball or player, is deemed dangerous play if in the vicinity of another player.

Any contact with an opposing player from the result of a slide-tackle will result in a caution (yellow or red card) at the discretion of the referee.

Goalkeepers are allowed to slide in an attempt to retrieve or stop the ball in the goalkeeper area, but not to tackle opposing players.

Players also may not play the ball when they are on the ground. If you fall over, you must get back to your feet before striking the ball again.

Play will be stopped if there are any serious injuries on the field. What is deemed serious and whether it is affecting play is at the discretion of the referee. A drop-ball will be issued by the referee in order to resume play.

A yellow card will result in a player sitting out for 2 minutes. The penalized team will be down a player for the entirety of the 2 minutes, regardless whether a goal has been scored. If a goalkeeper receives a yellow card, another player may serve the 2 minutes in his place.

If a player is shown a second yellow card, a red card must be shown.

Any player that receives a red card will be dismissed from the game. No substitution will be allowed and the team will play the remainder of the game down a player. An automatic one game suspension will be given for all red cards. All red cards will be reviewed by the Ref Committee and further disciplinary action may be taken by Ottawa Rec Sports based on the review.

Any use of offensive, insulting, racial, or abusive language or gestures towards any referee, staff member, official, coach. player or spectator may result in removal from the facility at the discretion of the Ottawa Rec Sports staff.

Any use of physical violence will not be tolerated and may result in the removal from the facility and an indefinite suspension from the community at the discretion of the Ottawa Rec Sports staff.

The referee will judge hand balls as per FIFA rules on hand balls. Hand balls are subjective as a referee may judge intent, ball to hand or advantage on the same play. Players are to continue playing if they see contact with a hand unless a whistle is blown.

In some field locations, games may be interrupted by balls entering the field from neighbouring games. In this case, if the ball disrupts ongoing play in any way, the referee should stop the play, return the ball and then restart play on the sideline with possession going to whichever team had possession when play was stopped. If the ball does not interfere with play, teams should return it to their neighbouring field quickly and continue on. Disruptions and advantages gained are at the discretion of the referee.

Men’s Competitive Turf rules will run on with two 35 minute halves, a 5 minute half time and regular 7-on-7 structure, but will follow strict FIFA rules for penalties, viewable here.