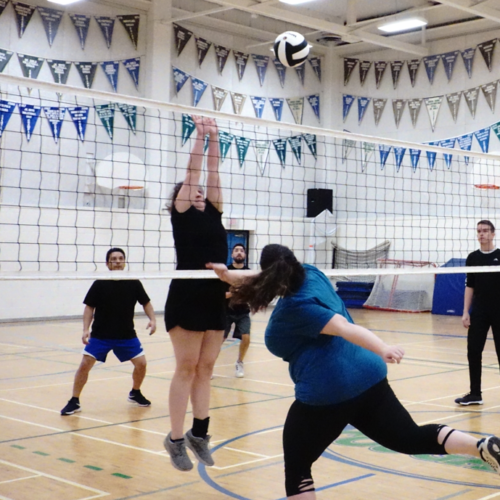 1. Games will start sharply at their scheduled time. Please arrive early to ensure you are dressed for play and ready to start on time.
2. Games will be 55 minutes long with a 5 minute warm-up.

1. 6 vs 6 coed
2. A min of 1 female and 1 male must be on the court at all times
3. If a team does not have any male or any female players they must play shorthanded (5-on-6)
4. Teams must have 4 players on the court or they will forfeit the game (min one male one female included).

1. The first serve of the first set is determined by a coin toss.
2. Server must serve from behind the restraining line (end line) until after contact.
3. Ball may be served underhand or overhand.
4. Ball must be clearly visible to opponents before serve.
5. Served ball may graze the net and drop to the other side for point.
6. Front row players can not attack the ball until the ball has dropped below the top of the net.
7. Serves are capped at 5 consecutive per player. After the fifth serve, rotate to the next server. Serving order must be followed.

1. Rally scoring will be used
2. There will be a point scored on every score of the ball.
3. Offence will score on a defence miss or out of bounds hit.
4. Defence will score on an offensive miss, out of bounds hit, or serve into the net.
5. Game will be played to 25 pts. There will be three games to 25 to determine the winner. If short on time, the winner of the final set will be the team in the lead when the ref calls time.
6. Must win by 2 points (to a maximum of 27 points)

1. Teams will rotate each time they win the serve.
2. Players shall rotate in a clockwise manner.
3. There shall be 4-6 players on each side.

1. Maximum of three hits per side.
2. Player may not hit the ball twice in succession (A block is not considered a hit).
3. Ball may be played off the net during a volley and on serve.
4. A ball touching a boundary line is good.
5. A legal hit is contact with the ball by a player body which does not allow the ball to visibly come to a rest.
6. The ball may touch any part of the body.
7. If two or more players contact the ball simultaneously, it is considered one play and the players involved may not participate in the next play.
8. A player must not block or attack a serve.

1. Stepping on or over the line on a serve.
2. Failure to serve the ball over the net successfully.
3. Hitting the ball illegally (Carrying, Palming, Throwing, etc.).
4. It is not a fault to touch the net, however it is a fault to touch the white tape while in the act of playing the ball. Violations are at the refs discretion based on whether players interfere with their opponents fair play of the ball by hitting the net.
5. Reaches under the net (if it interferes with the ball or opposing player).
6. Failure to serve in the correct order.
7. A back row player cannot block or attack the ball above the height of the net while they are in the front zone.

1. Understand, appreciate and abide by the rules of the game.
2. Respect the integrity and judgment of game officials and staff.
3. Respect your opponent and congratulate them in a courteous manner following each match whether in victory or defeat.
4. Be responsible for your actions and maintain self-control.
5. Refrain from using foul or abusive language.
6. Have fun!